The pact is the latest in a series of deals that Iraq has signed or initialed with some of the world's biggest oil companies. Earlier this week, Iraqi officials completed a final agreement with BP PLC and China National Petroleum Corp. and an initial agreement with a consortium led by Italy's Eni SpA. U.S. oil company Occidental Petroleum Corp. participated as a junior partner in the Eni-led bid.

For Exxon and Shell, two of the largest publicly listed oil companies, the deal grants entry into a country that boasts one of the world's largest reserves of petroleum. Like most of the oil-rich Middle East, the country has long been off limits to Western firms.

The structure of the deals -- essentially service contracts -- won't allow foreign companies to boost their own reported reserves and production numbers. Still, executives see them as providing access to Iraqi oil officials and a chance to work in the country's fields, both crucial if Iraq continues to open up to international companies.

The Exxon-Shell team had been seen as the favorite to win the contract, which calls for the consortium to boost production at the already-pumping field in exchange for a per-barrel fee. Among the three competitors, it offered the highest production target for the field, the oil ministry said. 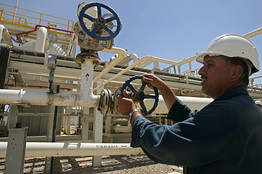 An employee worked at the Tawke oil field near the town of Zacho in Iraq.

An initial pact is expected to be signed later Thursday. The deal will then go to the Iraqi cabinet for approval before a final agreement can be signed, oil ministry spokesman Assem Jihad said.

Shell referred questions to Exxon. A representative for Exxon couldn't be immediately reached for comment.

The Exxon-Shell team beat out bids by a consortium made of Russia's Lukoil and ConocoPhillips, and another one led by CNPC.

After rejecting the oil ministry's payment terms as too stingy during a June auction, the three competitors for West Qurna later accepted the ministry's original $1.90-per-barrel payment. The fee will be paid for additional oil extracted above current production levels.

Originally, Exxon asked for a $4-per-barrel payment, while the Lukoil consortium proposed $6.49 a barrel. The CNPC team proposed $2.60 a barrel. West Qurna-1 is believed to have about 8.7 billion barrels in oil reserves.

The BP-CNPC group was the only consortium that didn't walk away from the summer bid round, agreeing to cut its own proposed fees drastically to secure an early deal for Iraq's super-giant Rumaila field.

Since the summer auction, the oil ministry continued talks with several firms regarding their bids. On Monday, Eni, along with partners Occidental and Korea Gas Corp. of South Korea, signed an initial agreement to develop the Zubair field in southern Iraq.

Baghdad, even with foreign help, still faces major hurdles once work begins. Security across the country is still poor, though overall violence has fallen since the worst of Iraq's sectarian violence, following the 2003 U.S.-led invasion.

Another possible hurdle is the health of the oil fields themselves. Iraqi oil officials have complained for years that Saddam Hussein pushed them to produce too much oil, too quickly, without needed investment. Oil analysts have worried that may have damaged reservoirs irreparably.

Iraq will hold a second bid round in December for 10 unexplored oil and gas fields. Exxon Mobil, Lukoil, CNPC and other oil giants are among the more than 40 companies that are eligible to participate in that auction.

—Jabbar al-Obeidi contributed to this article.